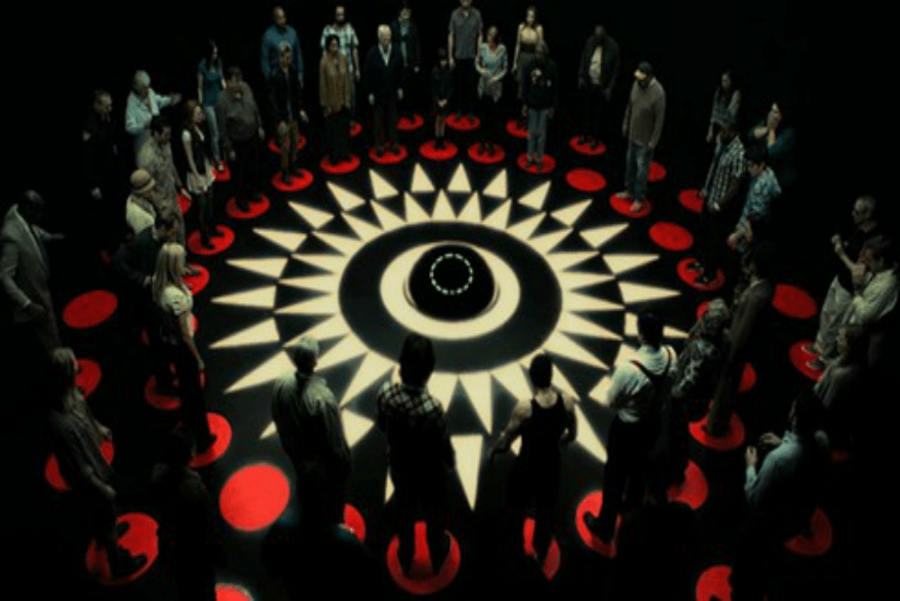 We were looking for a movie to watch one night and came across this film (Circle). Neither of us had seen it or even heard of it before. We were intrigued by the small summary Netflix provided us, but there was no official trailer to watch, so we had to take a leap of faith and watch it with little to no context. We were completely surprised (in a good way!) by this unique and fascinating film. We remember, on multiple occasions, gasping out loud from shock. We paused the movie several times throughout to try and comprehend what had just happened in the previous scene. It kept us hooked until the end! This is a must-watch if you are looking for a more realistic science-fiction movie that incorporates both human psychology and social issues.

Quick Plot Summary: The film begins as fifty people awaken in a dark room. Each person is standing on a small, red circle around a black dome in the center of the room. If they attempt to leave their individual circle, this mysterious black dome shoots out what appears to be a bolt of electricity, instantly killing them. Their body is then quickly removed by a mysterious, unknown force. Every two minutes, someone is killed. However, the characters eventually discover they have the ability to control who lives and dies, and they scramble to understand this “game” they are forced to play before it is too late.

This suspenseful, science-fiction movie captivates audiences with its mysterious plot and unique production. The whole movie takes place in one room, and there are no scene cuts. This allows the viewer to feel as though they are in the room, right alongside the characters, as they try to figure out how to survive.

Distinctive and Interesting Features: This movie incorporated a wide range of political issues that were interesting to note and evaluate. In an attempt to understand how they play the game, the characters try to get to know one another. The characters range in different genders, social and economic status, age, and sexual orientation, allowing for political and social issues to arise. The diversity among the characters also allows their personal prejudices to influence their decisions and actions. These issues include racial injustice and discrimination, homophobia, and socioeconomic differences.

The film also brings to light the idea of human nature, and how people will react in a life-or-death situation. The characters’ ethics and morals are tested further than they ever thought possible. It becomes difficult for the viewer to understand what the words “good” and “evil” really mean. Is a good person selfless? Is it wrong to be rude or untrustworthy if it means saving yourself in the process? The characters face the toughest choices of their lives as they must decide who to trust, who to betray, and who to sacrifice.

The film takes a number of drastic twists and turns as the viewers constantly try to fit the pieces together and determine the characters’ fates. It makes one wonder what they might do in this situation. However, these circumstances are so far from reality that it is difficult to put oneself in the characters’ places.

Recommended viewing age: mature audiences as death is a prominent feature of the movie; 13+

Lili: “This movie was incredibly mind-boggling as it really made you question human morality and ethics. I think it is a great movie to watch for anyone, as it delves into deeper psychological issues and is truly captivating.”

Sophie: “I thought this movie was really interesting! It was fascinating to see how human nature and status in society play a role in someone’s character and how he interacts with others in a tense, confined setting. The suspense kept me on my toes until the very last scene!”