Winter Sports in a Pandemic 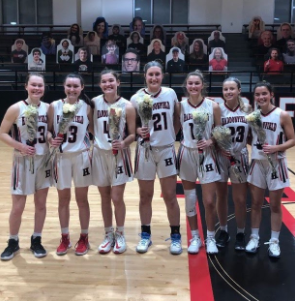 Like everything this year, changes have been made to the winter sports in order for them to be played in a safe way. All of the seasons were shortened, starting later and ending sooner. Out-of-state competition and fans are not allowed. Likewise to fall sports and school, athletes need to complete Covid-19 forms prior to practice and have their temperatures checked.

It can be difficult to stay motivated in times like these when there are not many big games or meets to train for. As a winter track athlete who typically participates in Sectionals, States, Meet of Champions, and races in New York, it is disappointing that I will not have the opportunity this year. However, I am still thankful that I am able to run next to my friends everyday and have an activity that gets me out of the house and away from the computer screen. Our team has a couple of meets scheduled against other teams in the conference, and we have been running intense workouts even with all of the snow. Our team also has google meets to make up for the loss of team dinners. Just like the girls, the boys’ winter track team will also be competing against conference teams in late February, and they have been training with the same intensity that they would any other year.

The basketball teams started the season with a lot of disappointments related to Covid-19. The girls had their first games postponed, and the boys had to quarantine for two weeks. However, the girls currently have a 3-0 record, defeating Sterling twice and Collingswood. The boys have had 4 games so far, defeating Collingswood and Haddon Heights and losing to Haddon Township and Sterling. Even though other fans are still not allowed, parents are now able to watch the games.

Wrestling does not start until March 1st and will end April 24th.

With all of the changes, the winter sports feel far from normal. Nonetheless, despite everything that has been taken away, athletes are still practicing and competing with energy and passion. Hopefully the spring will yield a more normal sports season with more games, meets, and championships to look forward to.