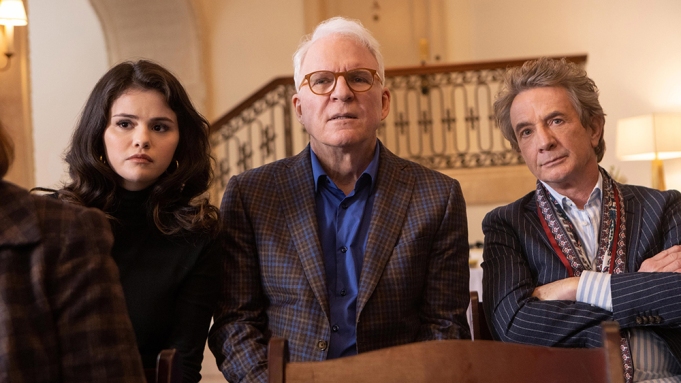 With a new year here, it’s time to reflect on the amazing show releases of the past year, especially those that have recently come to a close.

Hawkeye, a Marvel miniseries that was released on Disney Plus around the time of Thanksgiving, had its season finale on December 22nd. The show itself took the viewer on a journey of grief, family, and suspicion, all surrounding the famous Avenger, Clint Barton (aka, Jeremy Renner), and his new prodigee, Kate Bishop (played by Hailee Steinfeld), who just happened to be at the wrong place at the wrong time.

Other appearances that left viewers wanting more included Florence Pugh’s Yelena Belova (the sister of the late Natasha Romanoff), Vincent D’Onofrio’s Kingpin, and finally Alaqua Cox’s Maya Lopez (aka, Echo), the second-in-command of the tracksuit mafia (the main villain of the show), who has been commended on her representation of deaf and handicapped communities.

ONLY MURDERS IN THE BUILDING

An old TV crime star, a former Broadway producer, and a young adult who knows too much–what do they all have in common? They all love the same true-crime podcast starring Tina Fey’s Cinda Canning–that and they were all living in the Arconia (a ritzy apartment building) on the night of Tim Kono’s murder.

The show took off on August 31st, and had its cliffhanger ending in October this year. The stars of the show include Selena Gomez, Steve Martin, and Martin Short–as well as Amy Ryan, who was best known for her role as Holly in the Office. Throughout the show we follow these residents on their quest for stardom as they try to solve the murder that happened in their building, while documenting everything in their new murder podcast. If you are looking for more, the series has been renewed for a second season!

This Korean drama has quickly become a phenomenon in modern culture. Surrounding the idea of the dangers of greed, we follow Seong Gi-hun, an indebted divorcee, as he enters a dangerous competition where participants play children’s games in hopes of earning a large sum of money. The catch: whoever loses in each round of games is killed, until there is only one person left standing.

The thing is, participants in the game have the choice to leave, and many do–at first. Though, when financial states become desperate, Gi-hun and many others end up returning to the games, in full knowing that they could die, as well as get others killed.

Each of these shows released on different platforms (Disney Plus, Hulu, and Netflix respectively), and each have had a huge impact on television this year. What’s next in the television realm? Well if it’s anything like these showstoppers, we’re sure in for a treat.